The mixing of Real and Not Real in Transmedia

(the musings continue, now with something I'm struggling with right now)

One particular challenge that I face while developing transmedia, is the thin line between being just about enough fictional, but not too fictional. I don’t work – or, should I say, I do not at the moment work – with drama-based transmedia projects; instead, the ones we’re working on now are music projects, game shows, kids formats, etc.

As I see it, one key element of any transmedia venture is the classical ”willful suspension of disbelief” (love the phrase, btw). You know that you have your narrative superstructure in place, it’s solid and will be a fine, nurturing growth bed. You have some – three, then, to go by PGA’s rules for a transmedia producer – different media platforms utilized. The different pieces of content support each other, either directly or indirectly, but are not duplicates of each other. What you need now is for the consumer / participant (the ”consupant”? sounds a bit constipated...) to go into your story, your narrative superstructure, and embrace the willful suspension of disbelief and engage him-/herself.

This is a bit easier when building a drama-based transmedia setting, as anyone connecting to the mythology of the story knows and has accepted that it is a story. When blending ”real” stuff with a narrative that contains fictional elements, the cracks are a lot easier to spot.

What I’ve found out so far is one fairly simple thing, yet hard to stick to while developing, writing and scripting. Simply – be as true as possible. If you embark on the mission to include real stuff – be it persons, objects, physical landmarks or whatever – in your transmedia project, these different kinds of stuff will be a lot more credible if they, to as large an extent as possible, base themselves and present themselves as their real selves. What you don't want is for these characters and stuff to show any light shining through them. They need to be as solid as possible - which is only possible if they are, for the main part, grounded in who or what they really actually are.

The only thing you need to add are the small fictional things that lets these real persons and real places function within your transmedia venture.

I’ll update with an example of ours as soon as we’ve got stuff to show ☺
Upplagd av Simon kl. 12:42 AM No comments:

We started out as developers of interactive television-formats some five-six years ago. These were based on television as the core of the content, with interactivity included either via mobile phones or via digital set-top-boxes. We realized very early on that if you want to develop something that should accompany a traditional piece of content - like a tv show - you needed to develop the two (or more) together from the start. Thus you avoided the awkward feeling of added content being slapped onto existing content, without any form of seamless and enjoyable experience.

As time has gone by, we have thankfully been able to let go of the limited MHP interactivity for set-top-boxes and have happily embraced the cross media / transmedia approach to telling stories, be they music shows, kids shows, game shows or just about any kind of content. Now, some things are always good to keep in mind while starting up or being in the development phase of a transmedia project:

First off, make sure you're developing and creating compelling content - you need a great story to function as the framework, with enough holes in it for the audience to be able to fill in stuff themselves and become engaged in the story (Jeff Gomez's "Swiss Cheese-model"). Don't forget the narrative superstructure - build it solid enough to serve as a vehicle for this particular story, but also as a bed for future stories (from past, present and future in the story universe) to spring from.

Secondly (but developed at the same time so it all fits together nicely without any last-minute panic solutions, thank you very much) - logical ways for the audience/users to connect to the story, from platforms that are themselves logical ways into the story. I.e., do not make an iPad app just 'cause everyone else has one. If it's not essential for how you experience the story, leave it out.

Thirdly, get out there and get some traction for your content. Lots of stuff gets developed and produced and perhaps gets a blog mention or three, topping out at 452 users over a three month period. Don't do that. Get those people interested that can tip your little thing over the edge and into the abyss of a global phenomena. Get everyone to step over that invisible "WTF"-threshold (the threshold where you KNOW you should be doing something else but you're seeing thousands of people (who also should be doing something else) involving themselves in the story and having the time of their lives, so you think "Oh hell, WTF" and you jump right in). How? Read up on Propagation Planning. As they say - plan not for the people you reach, but the people they reach. Find your spokespersons. Be inclusive, not exclusive. Which nicely builds over to...

Be interactive. Listen. Communicate. You're probably not right every time, and others may have better ideas for your story and it's development. Face it - it is no longer yours only. Embrace that fact and take it onwards - it's all a good thing.

Lastly, don't leave people hanging. There's nothing worse than getting peoples expectations up and then letting them down. They have invested in your creation. Make sure they get full value for their investment. If you do, they'll be back.

Feel free to add stuff in the comments!

"Myself? I believe that the changeover to new forms and ways of watching television will go much slower than people think, or hope for. I believe that in five years time there will be a small minority watching television via portable devices, while for the most part the audience will watch television in their living rooms, just like back in the 50s. I also believe that content is the most important factor, and that less energy and resources should be spent on developing and offer to people gadgets and trinkets they don't want or need, and more should be spent on doing great television shows."
Upplagd av Simon kl. 9:45 PM No comments: 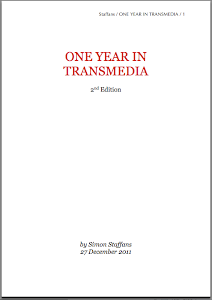